It is less than a year ago that ADMD accepted to organize the 17th World Congress of Right to Die societies upon my proposal and after our Colombian friends gave up the idea of organizing it.

We organized it in the same spirit as our European meetings in Strasbourg in October 2007.

It was not an easy task. Less than 10 months to organize a 4 days event which is usually prepared 4 years in advance in spite of a very heavy schedule and dramatic affairs since the tragedies of Chantal Sébire, Clara Blanc and Rémy Salvat happened one after the other. 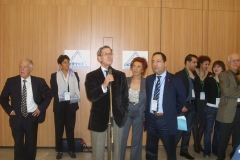 That is why I would like to thank in your name all the team of voluntary helpers and workers of ADMD who succeeded in this mission under the professional guidance of Daniel Carré and Jacques Lawson. It is thanks to them that you are all here tonight, that we will have our 29th delegates meeting on Saturday and that the first international day for the right to die in dignity will be launched on Sunday November 2nd.
Cliquez ici pour la suite.